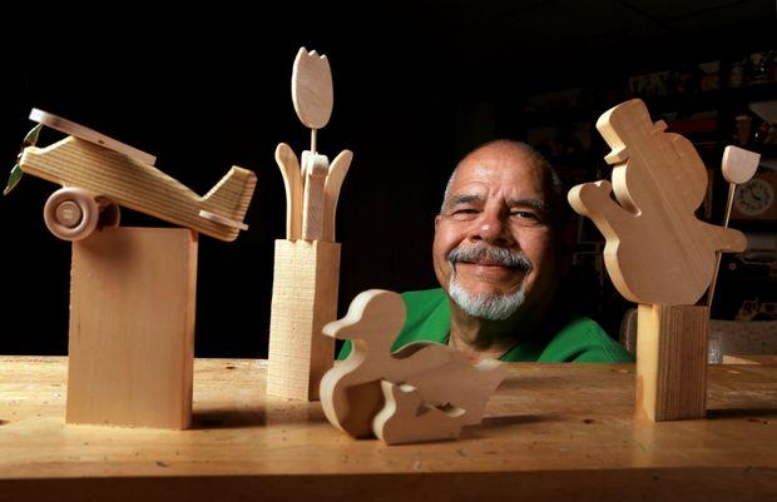 This article appeared in the ST. LOUIS POST-DISPATCH on April 15, 2016. It is posted here with permission.

Bored with TV, Jaycie Martin’s eyes lit up when she was asked if she wanted to paint a
wooden toy.
Within a few minutes, the 8-year-old patient at Cardinal Glennon Children’s Medical
Center was out of bed and sitting in front of a table full of paints, ready to transform the
butterfly cutout into a work of art.
If painting wooden toys was not offered as part of her care, “I’d go crazy,” Jaycie said.
The toys, which include race cars and airplanes, hummingbirds and cupcakes, have been
a part of local children’s hospitals for 20 years, thanks to a group known as the St. Louis
Woodworkers Guild. On Thursday, the members will meet to celebrate a milestone —
the creation and donation of 40,000 toys to sick children.
The 115-member guild, composed largely of retired men with wood shops in their
basements, craft unpainted toys that are delivered monthly to three hospitals —
Children’s, Cardinal Glennon and Mercy Children’s.
“It takes more than medicine to heal a child. I’ve believed that forever,” said Alberta Lee,
child life manager at Mercy. “They can get lost in these projects, and it gives them some
normalcy. For those few moments, they forget they have chemo treatment later that day.
That’s what we want — for them to forget about their illness for a little bit.”
John Patton, a longtime guild member from Crestwood, said the woodworkers got into
toy making more than 30 years ago as part of the Marine Corps Toys for Tots program.
But as the requirements for the program shifted to commercially manufactured toys, the
group reached out to hospitals to donate their creations.
Patton, 83, and his wife, Helen, collect the toys each month and deliver them to
Children’s and Cardinal Glennon. Another guild member drops off the toys at Mercy.
Patton has stepped back from creating toys.
“All the toys that are supplied to me are not precise. Sometimes the wheels are not glued
on or sometimes they are too glued. So I fix them. I’m the quality control guy,” he said.
Patton has worked with the hospitals to make sure they are getting toys that are most
appropriate for the children.
“We talked a lot about safety issues, making sure the toys were smooth,” said Pamela
Aubuchon, a child life specialist at Children’s. And hospitals want some of the toys to be
interactive, such as cars with wheels that move, so the children can play with them as
well as paint them, she said.
At the Thursday night guild meeting, official business will be set aside to celebrate the
relationship with the hospitals, expected to send representatives.
“I’ve asked them to tell us the meaning the toys have for the children,” said guild
member Mark Koritz. Although many of the woodworkers have made hundreds of toys,
they have not seen the children play with them.
Abbie Hedgpeth, a child care specialist at Cardinal Glennon, plans to attend and share
stories of how the children enter the hospital’s playrooms each day, looking forward to
simply being a kid. Having the toys to paint “make our jobs a whole lot easier,” she said.
At the meeting, member Wayne Humphrey will be recognized for making the most toys
during 2014 — about 400.
Humphrey’s handiwork is crafted in the basement of his home in Creve Coeur. He has
been a woodworker for about 30 years. When he retired five years ago as an industrial
equipment salesman, he began making toys.
Among his new efforts this year are cutouts with the word “MOM” flanked by hearts.
The design will be something for the children to paint and give for Mother’s Day. A
similar version will be available as gifts for Dad in June.
“I started cranking out a few at a time, and got going from there,” said Humphrey, 65.
“My skill level is not such to be building furniture. I don’t have the patience that runs
hundreds of hours for that.”
Humphrey is among the 20 or so guild members who regularly contribute to the toy
program. Seasonal wooden toys are a popular part of the program. Reindeer at
Christmas. Rabbits for Easter. Turkeys for Thanksgiving. Shamrocks for St. Patrick’s
Day.
The guild plans to expand its relationship with the hospitals, making miniature pieces of
medical equipment such as MRI machines and CT scanners. Toy versions of medical
equipment are common in children’s hospitals, but a company that made the items went
out of business.
For Jaycie, painting toys breaks up the monotony of her long stays at Cardinal Glennon.
About every other month, her parents make the 2½-hour drive from tiny Christopher,
Ill., for Jaycie to have two-week antibiotic treatments for her cystic fibrosis. While
admitted, she is confined to her hospital room.
Painting toys helps Jaycie stay engaged.
“She goes stir crazy. She needs a way to express herself, and that’s how she does it,” said
her mother, Marcy, of the toy program.
Jaycie painted a bear that she gave to an aunt she seldom sees. A giraffe with glittery
pink spots is one of her proud creations. She said it would probably be a gift to her
father, Jayson.
As for the butterfly with the blue wings she painted this week, its destination is
unknown.
In the meantime, hospital personnel have suggested Jaycie hang it from her IV pole
until she goes home next week.